i was able to catch a couple of features last weekend, and one of them is dr. seuss’ Horton Hears a Who.

jim carrey‘s sagging career has certainly received a much-needed shot in the arm with this delightful animated film. the filmmakers have done a good job of translating Horton Hears a Who, which topped the weekly boxoffice chart during its debut, into the screen and jim carrey is one of its driving forces.

it’s rather a bit jarring to see and hear jim carrey (or at least his animated alter ego) as the bumbling and innocuous Horton the elephant, who helpfully struggles to keep Whoville — apparently a tiny speck of a village perched on a small pink flower — from falling apart literally.

the cast includes steve carrell (as the mayor of Whoville), carol burnett (sour kangaroo), isla fisher (whoville scientist) and will arnett as the dim-witted eagle who aspires to be known as a tough baddie.

10,000 b.c. was one of the movies i’d been able view lately. and although it hasn’t really fared well among the critics i don’t regret watching it. it performed well in the box office, though.

10,000 b.c. (i’m adding the periods here because that’s how we usually deal with these acronyms at work) is, as you might guess, set in prehistoric times when most humans lived in small hunter-gatherer groups and woolly mammoths and saber-toothed tigers roamed the world at large.

with a cast of unknown actors, the film is a simple story about ancient prophecies and human ties that transcend distance and racial lines. a mammoth-hunting warrior (D’Leh) from the colder regions of the north must travel east to save the woman he loves (evolet) from the evil clutches of an advanced Egyptian-like civilization that seeks to dominate and enslave its smaller and weaker neighbors.

one of the film’s strength is the clever use of CGI, which blended well with the live action going on. some violent scenes have been toned down, i guess as a sort of concession to attract younger viewers. there are also a few rough patches here and there but overall they’re not enough to mar the whole movie.

i’ve already watched Vantage Point twice: the first time as a viewer (for sheer pleasure), and the second as a critic (for a more objective look and to pick up on the things that i’ve missed or overlooked earlier).

i have already written a brief review of Vantage Point in my other blog (Recycled Thoughts), so i guess there’s really no point in rehashing things except to say that i liked it well enough. 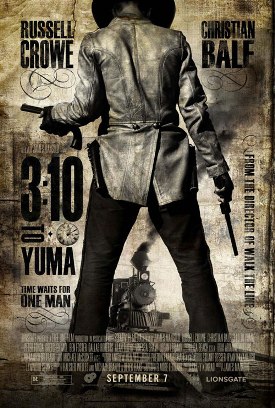 i have also seen 3:10 to Yuma last weekend (i know it’s been ages but i guess better late than never), which of course features such heavyweights as Russell Crowe, Christian Bale, Peter Fonda and even a cameo role for Luke Wilson. bottomline, it was just as explosive and as mesmerizing as i had anticipated.

i was counting on a shattering climax, but i must admit the direction that 3:10 to Yuma took still managed to surprise me (thanks to Peter Mangold‘s spare but effective handling of this remake). it was nice to see russell crowe taking command of the silver screen again as ben wade, the charming and ruthless leader of a cutthroat gang of thieves. he gets a steely counterpoint in christian bale (as dave evans), whose quiet and brooding intensity burns through piles of life’s hard knocks as a down-and-out rancher who volunteers to help bring the felon to justice. peter fonda turns in a great job too as this tough-as-nails mercenary with a dark past. 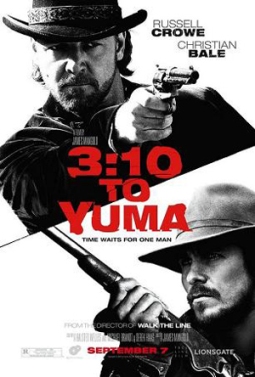 and then there’s charlie prince (played by ben foster), ben wade’s fiercely loyal second in command who is basically one trigger-happy sociopath. with all these dudes thrown together in one explosive setting, you can be sure that the bullets will be flying in all directions and body bags will be piling up.

3:10 to Yuma is definitely one of the best films i’d seen in the last few months.